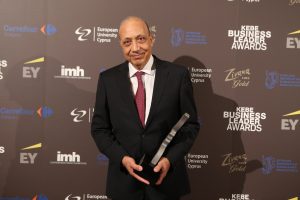 The Managing Director of Island Oil (Holdings) Ltd, Chrysostomos Papavassiliou, has been awarded as the 2015 Business Leader in the Shipping Sector by the Cyprus Chamber of Commerce and Industry (“KEBE”). According to KEBE and joint organizer IMH, the awards seek “to recognize those who operate with integrity and ethos, who have gained the respect of their own employees as well as that of their competitors and the broader business community, and who work on the basis of the key principles that characterize a successful leader: dynamism, innovation, foresight, and knowledge.”

The awards ceremony, held at the Evagoras Lanitis Center in Limassol on Friday, was inaugurated by the President of the Republic of Cyprus, His Excellency Nicos Anastasiades, and was attended by important figures of the Cyprus business world.

When called to the podium to receive his award, Mr. Papavassiliou thanked his family and colleagues at Island Oil, noting that “behind every achievement, there is always a team effort.”

“Therefore”, he continued, “this recognition really belongs to the Island Oil team, i.e. the Board of Directors, the Managerial and non-Managerial personnel, who with their hard work and support built a gradual growth and continue to meet the company’s targets and objectives.“

Thanking the Island Oil team for its loyalty and support, he closed his speech by noting: “I am certain that with the same devotion, teamwork and determination, our organization will continue to flourish.”

Island Oil Holdings, a group of companies whose main commercial activities revolve around the supply and tr...

In line with the Group plans for sustainable growth, Island Oil (Holdings) Ltd is pleased to announce Ana B...

The Ministry of Energy and the Cyprus Chamber of Commerce and Industry (CCCI) have awarded Island Oil (Hold...

Island Oil Holdings, a group of companies whose main commercial activities revolve around the supply and tr...

In line with the company plans for sustainable growth, Island Oil (Holdings) Ltd is pleased to announce the...

Island Oil (Holdings) Ltd is pleased to announce the launching of a new international trading office in the...

We are pleased to announce that Island Oil Holdings is a proud sponsor to the concert “Ψυχη & Σώμα” (loosel...

The LPG tanker ENERGEIA, one of the vessels in the Island Oil Holdings fleet, actively contributed to the r...

Island Oil (Holdings) Limited is pleased to announce the appointment of Mr. Kieran Michael C. Brown in the ...

Within the scope of Island Oil steady growth plans, we are pleased to announce the appointment of Mr. Chee ...

Headquartered in Limassol,
Island Oil Ltd is the flagship
of a group of companies
mainly active in the marine
and domestic fuels sector.